How do I scan documents to Android

I learned about applications for scanning documents about 6-7 years ago. I would not say that I often scanned something, but every time I had to contact a neighbor who had a scanner, I felt an inner discomfort. Therefore, when I saw the news on Apple Insider.ru that in the App Store you can download the Scanner Pro application for scanning for free, which normally costs 229 rubles, I was really very happy. After all, at that moment I killed two birds with one stone: I found out that in principle there are such applications, and downloaded the best solution for free. But for some reason, there was no separate Scanner Pro version on Android. So I started looking for a replacement. Running around friends to scan a document? No need for this anymore

At first I used the Tiny Scanner app. It was very similar to Scanner Pro in both design and available feature set. However, some of the features I'm used to in Scanner Pro weren't there. I really missed the auto-send of files to the cloud, the automatic text recognition feature, which sometimes came in handy, and the auto-image capture, not to mention the ability to sign documents. So I looked further until I came across Microsoft Office Lens. Microsoft Office Lens proved to be a very user-friendly scanner that surpassed even my favorite Scanner Pro in many ways. Despite the fact that it does not support auto-capture, it has a ton of other features that really come in handy when working with documents.

The first thing I appreciated was the interface. The application immediately opened the camera at launch, without forcing me to scour the interface in search of the corresponding button, which for some reason is usually made small and invisible in scanning applications. Right there, above the shutter button, I was asked to choose a photo from those stored in my gallery. That is, in fact, you can turn into a scan not only a photograph of a document, but in general any image that you have. 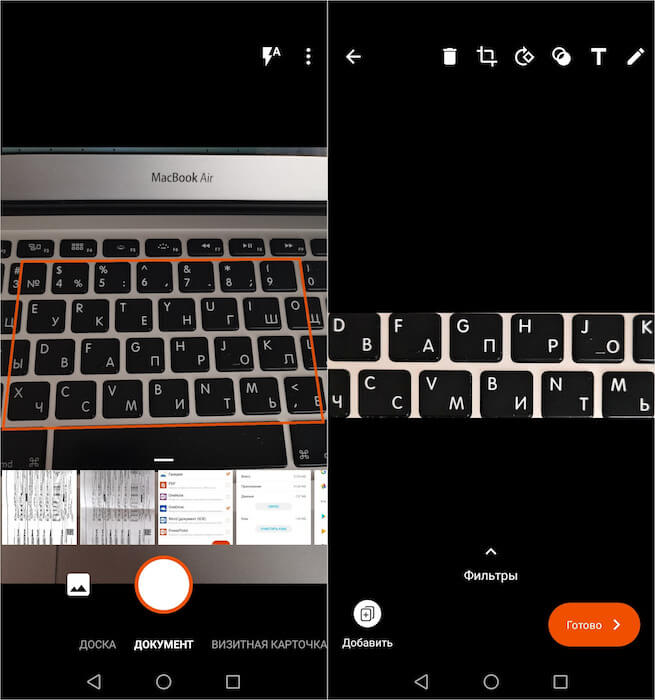 Microsoft Office Lens supports not only the stock gallery, but also third-party cloud services like 'Google Photos' or Google Drive, not to mention the stock OneDrive. Therefore, if you do not have the required snapshot on your device, but do have it in the cloud, you can link your accounts Microsoft and Google and pull up images for scanning directly from 'Google Photos'. This is super-convenient, given that it is often trivial to do the centering and framing of the frame on the spot, but you need to quickly take a photo, as, for example, when contacting government agencies.

Microsoft Office Lens doesn't have the same auto-capture feature as Scanner Pro. I say 'the same' because it is presented here in a slightly different way. If the Scanner Pro itself determines the boundaries of the document and releases the shutter itself, then Microsoft Office Lens is capable of only determining the boundaries, and the user needs to release the shutter. However, in most cases, Office Lens does a great job of keeping the focus on the document or selection. As a result, the resulting image does not have to be corrected in any way. All that remains is to apply the scan filter and confirm the save, after which the snapshot will automatically fly to OneDrive or 'Google Photos' depending on what you are using.

Scan of documents from the phone If you are not satisfied with the result, you can adjust the picture as you need

However, Microsoft Office Lens has a super-handy crop function. Thanks to it, you can take a picture of the document as you like, and then align it using the built-in tools. In the cropping mode, a special frame with movable sides is superimposed on the image, which can be moved left and right and up and down, due to which it is possible to 'stretch' even a frankly unsuccessful picture taken at an angle.

I've tried several scanning apps, including Adobe Scan, the built-in Google Drive scanner, and the stock scanner iOS from the Files app, but Microsoft Office Lens is my personal favorite so far. Yes, it is not suitable for signing documents, and this is its disadvantage, so you have to resort to alternative methods. Personally, for these purposes I use the standard 'Mail' application on iOS, so I can't refuse the apple ecosystem. And why, if you can not limit yourself in your choice?