What smartphone will James Bond have in the new film

Probably, there is no one among gadget lovers who does not know that the international exhibition MWC 2020, which this year, as usual, was to be held in Barcelona, ​​was canceled due to the coronavirus raging in the world. This led to the fact that many smartphone manufacturers were forced to postpone the releases of their devices to other dates. We have already seen some of them, some are still waiting for us, but one brand will present not just a smartphone, but a real collaboration with James Bond. Considering the manufacturer, such a move would look like a desperate attempt to reclaim the credibility that has left much to be desired and grab the attention of buyers. Who will it be? And most importantly, why? Who didn't show smartphones at MWC 2020?

The correct answer would be “no one showed smartphones at MWC 2020,” for the reason described above. Among them is Nokia. Now the time has come and the company has sent out invitations to the presentation on March 19 in London. There is a feeling that this will be another failure, but more on that below.

In general, the fact that the company did not show its smartphone at a major international exhibition is a very unpleasant moment. Of course, for her, not for us. All due to the fact that several hundred people will look at it at a special event, and tens of thousands at the exhibition. And just to attract attention during such a large thematic event is easier than just holding an event. The invitation itself does not give an understanding of what we will be shown. As usual, it is intriguing and simply intended to attract attention. The collaboration with the creators of the James Bond series should attract even more attention. Information about this was published in his Twitter by the director of HMD for products Juho Sarvikas.

James Bond's smartphone will be Nokia

It is still impossible to say for sure which smartphone will be shown to us, because there is very little information so far, but, apparently, it will not be the most sophisticated flagship, but a device of approximately the middle segment.

It is supposed to have 4 cameras, 64 GB of ROM, 6 GB of RAM and a fingerprint scanner on the back. All this “beauty” will cost about $ 180, which does not mean the top-end component of the device.

On the other hand, no one says that this device will be the only one that will be shown at the presentation. There is a possibility of 5G – a smartphone with Snapdragon 765 on board.

It is not yet clear how the famous British intelligence agent will be involved in the process, but it is possible that this smartphone will appear in the film itself. Although it is difficult to assume that Bond will use it on an ongoing basis. Most likely, he will break it, take it away from one of the opponents, or simply receive it as a spy device, which he uses only once at the end of the film. 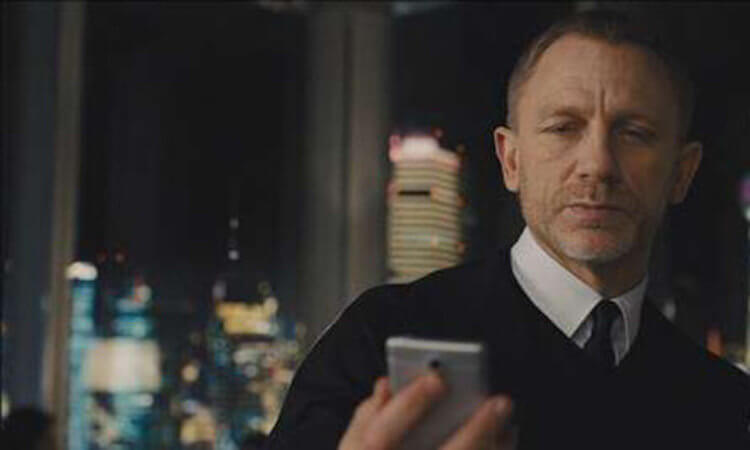 Crack it on the floor and that's it … All Nokia.

This option looks the most realistic. Although, perhaps everything will be limited to just the right to mention the name of the painting at the presentation or the release of a limited edition with the numbers “007” on the back wall.

Why are smartphones shown in the movies?

In any case, for a brand that is trying to stay afloat with grief in half, such cooperation is unlikely to be cheap. Although the James Bond films have lost some of their former popularity (but not as much as Nokia), advertising in them is expensive.

We all remember how Nokia tried to remind of itself with “bananas”, 3310 reincarnations, smartphones with a huge number of cameras and even rumors about the imminent release of a foldable smartphone. But this is unlikely to save them. Only a few good and inexpensive smartphones can save them. The problem is that it is very difficult. Although, the Chinese, which is HMD, are no strangers to bringing smartphones to the market using this strategy.

So far, apparently, they are preparing another walk-through model, which will definitely not distinguish them from competitors. It's a shame, because as long as they have a name and they can play on it and release something like Realme X2 Pro for little money and hit the jackpot.

Our Alexander, of course, is not James Bond, but a good smartphone fits well in either hand. Nokia cannot go this way.

In general, returning to Bondiana, shooting a device in a picture is a fairly popular move. Displaying other big brands in a way that gets noticed but not seen as advertising is very difficult. This is due to the fact that not all of them are used in life all the time, unlike cars and smartphones.

This is exactly what can be shown in the frame, promoted at the presentation and even released a limited version. Of course, this does not always happen that way, and sometimes the technique is selected by props specialists, not marketers, but more often than not this happens for a reason.

When is the new James Bond coming out? This is not the time to die.

The new Bond film will be released on March 31, 2020 in the UK and on April 9, 2020 in Russia. The main role, as in the last few films, will be played by Daniel Craig. Rami Malek will also star in the film, one of whose recent roles is the role of Freddie Mercury in Bohemian Rhapsody.

Many are already saying that the release of the film, ironically, was not very timely. It's called No Time to Die. Given the situation in the world, such a name looks a little ominous. Largely because of this, they even canceled the presentation of the film in China.

From such coincidences, one can recall the release in 2002 of The Lord of the Rings: The Two Towers, which was released when the memories of the September 11 tragedy were still fresh, in which two towers of the World Trade Center in New York were destroyed. Then, too, many discussed the relevance of such a name. In some countries the title of the film was translated using the words “two fortresses”, including in Russia.

Let's see how events will develop, and how deeply Nokia has “partnered” with the creators of the famous franchise, but I think that this will not help them much.