When you buy a new smartphone, you want to know about it not only what is told from the stage at the presentation and very sweetly painted in advertising materials, but also something else. For example, it is always interesting whether an expensive vehicle will break if it falls on asphalt, concrete, parquet, carpet, and so on. Or if it gets scratched in your pocket with coins and keys. You can say as much as you like that those who break new smartphones on camera are idlers, but it is thanks to them that we know what awaits us after the purchase. And now, almost immediately after the release of the new OnePlus Nord, information appeared about what to expect in case of its fall and other “acts of vandalism”. This phone is good. But how does it resist damage?

Most often, such tests appear on the well-known YouTube channel JerryRigEverything. This time, he was one of the first to get hold of the OnePlus Nord presented last week and subjected it to all his most rigorous tests, in which there is no concession for any smartphone.

The smartphone will go on mass sale in some European countries only on 4 August at a price of 400 euros. Inside, everything is fine with it and it can be safely considered one of the best devices for your money, if not the best. But Zach Nelson is more interested in what's on the outside than what's on the inside. He had already prepared his sharpened knives and red-hot lighters in order to check everything.

The phone is ready for execution.

The video can be found on the JerryRigEverything YouTube channel or simply watch it in the window below. We will simply analyze the actions of the famous blogger in a text version and understand whether it is worth dealing with this smartphone. How durable is the case of the new OnePlus Nord

To classify the resistance of any object to scratches, it is customary to use the Mohs scale. It shows how strong an object is on a ten-point scale, where 0 corresponds to the strength of graphite, and 10 is already diamond. On this scale, the new smartphone corresponds to hardness level 6. This is typical value for Gorilla Glass 5, which covers both sides of the OnePlus Nord. Even if you put a few deep scratches on the place of the fingerprint scanner, it still continues to detect the finger and unlock the smartphone accurately. This is important, because it would be a shame if such damage would disable an important function of the smartphone.

If dropped, the plastic parts of the case (side frame) will be severely scratched and there will be no need to talk about a beautiful appearance. But Zach Nelson noted that the buttons and the SIM-card tray are made of metal. It feels much nicer tactilely than just plastic. The side edges are plastic and that's bad.

As for the screen, the smartphone did not pass the standard JerryRigEverything test with a lighter. Usually, when the screen is exposed to open fire for a few seconds, a black spot appears on it, which disappears after a few seconds. AMOLED The screen of the new item with a refresh rate of 90 Hz does not return to its original state, unlike conventional LCD matrices. 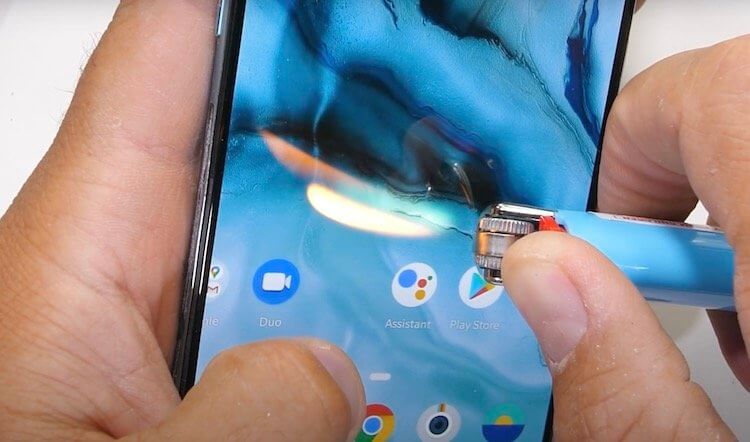 The screen will not burn, but it will not work well.

When bent, the smartphone as a whole did not suffer, although it was quite deformed. That is, you can carry it in your back pocket, but it is better not to exert a more aggressive effect on it. The most vulnerable spot in case of excessive bending will be the display panel (not glass) and the thin areas of the frame next to the buttons.

How to protect your phone from damage

It is important to understand that damages to a smartphone are like fingerprints – it is difficult to find two identical. Every fall leaves its mark. Bloggers only check the integrity of the case and its appearance, but if the smartphone falls, it can suffer very much without visible defects. For example, from deformation during an impact, a crack may appear on the board or a thin contact or train may fall off. As a result, with a completely normal appearance, you will get a smartphone that will slow down or, for example, will not have Wi-Fi working. This must be borne in mind when buying a device “hand-held”. I talked about this separately in one of the previous articles. That's how phones bend, but they seem to work.

If you are thinking whether to use the case with a new smartphone and cover its screen with film, remember how many times you dropped it recently. If the number of times tends to zero, then you should not bother too much. Modern screens, especially if they are covered with Gorilla Glass 5 or 6, can withstand a lot and hardly get scratched (see what happens with the new Gorilla Glass Virtus). If you are worried that you will drop your smartphone on the asphalt, then no glass or films will save you from this – the screen may still break.

And also glasses, films and covers, on the contrary, dampen. You stop being careful about an expensive device and increase the risk of it falling. Then what I have already told begins. The screen and back panel will remain intact and the insides may be damaged. Just imagine what can happen to a camera, the movement of ten elements of which is performed in the range of fractions of a millimeter. The slightest drop can render it unusable. You can bring the phone to such a state, but you have to try hard. By the way, it is this place that can break with a strong bend.

So think about it. Maybe it's better to give up covers, start using your smartphone more accurately and at the same time get tactile pleasure from its body?