The leak showed how the Samsung Galaxy Note 20 will look

This is not to say that before we did not know how the new Samsung Galaxy Note 20 would look, but now we have much more confidence. Recently, information appeared on the Web regarding the rendering of a new smartphone. Although, what can I say, it was the render itself that leaked. Perhaps it will change a little more, but the image with its entire appearance tells us that we should not expect any serious changes. And it's too late to wait for them. A little more than three months are left before the presentation and the company needs not only to decide on the design, but rather to start production. This is the only way to satisfy the great demand for a novelty if it turns out to be good. Especially against the backdrop of not very good sales of the Galaxy S20. 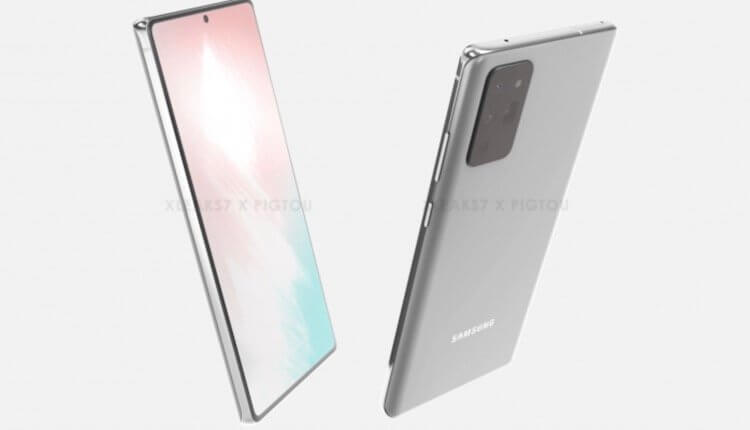 This is what he most likely will be.

What will be the Galaxy Note 20

Renders of the new Samsung Galaxy Note 20 appeared thanks to Pigtou and xleaks7. If they really are leaks, we can say that there are not many changes in it and everything is done in the traditional Samsung style of recent years. First of all, the changes concern the size of the device and design elements typical of the Samsung Galaxy S20. A different situation would be illogical, since the lineup of one year should have common key design features.

The first thing you'll notice on the back is the much larger camera module than the S20, located in the upper left corner, measuring 38.1 x 21.9mm. It looks like all the lenses and flash will be inside this monster. This was not the case with the Note10. Pigtou notes that the camera module is still under development, so lens placement may differ from what will be in the final product. But there is no doubt that everything will be packed in one element. The edges will be rounded.

The Samsung logo can also be moved from the middle of the back wall towards the bottom. The back will also bend slightly along the edges. Usually this shape allows you to hold the smartphone more comfortably.

The Note 20's physical buttons will move from left to right, just like the S 20, compared to its predecessor. There aren't many changes to the bottom of the phone. The USB Type-C port is still in the middle, between the microphone on the left and the speaker grill and S Pen on the right.

The front screen will be traditional for premium smartphones. Everyone is now striving for bezellessness and the Note 20 will be no exception. Judging by the render, the frames will have a minimum thickness, and there will be room for the camera in a small notch. I don't really like this design, but you can put up with it. This is how all projections look.

The display is expected to have a 6.7-inch diagonal and a body size of 161.8 x 75.3 x 8.5 mm. This makes the phone about half a millimeter thicker than its predecessor, while other dimensions have grown substantially – the phone is almost as big as the Note10 +. It is still difficult to say how the Galaxy Note 20+ will look like this year and whether it will be at all, but rumors that it will be there are still.

From time to time, rumors flare up with renewed vigor that a foldable Galaxy Note awaits us, but overall the idea looks very strange. On the one hand, the company already has two whole lines of foldable smartphones, and on the other hand, an extra modification never hurts. But is it necessary to somehow spoil the idea of ​​the all-in-one Note for this? Moreover, the Galaxy Note is an obligatory work with the S Pen, but how to use it with the screen of a folding smartphone remains a mystery. You can't go without the S Pen.

The fact is that it is already scratched literally from the look, since the screen coating material is very soft. It is impossible to use a full-fledged durable glass in a structure, since it does not bend, and what bends cannot be solid. I am sure that the hardest coating possible and the most technologically advanced has been chosen for the screen, but the laws of physics cannot be fooled and you cannot expect that it will be as durable as the latest generation of Corning glasses.

If we reason correctly and the screen is soft, the stylus will simply destroy it after a few months of use. The entire screen will be covered with a cobweb of small scratches, which will be very clearly visible, especially in bright light.

If this can be allowed when a separate line is released, then is it worth doing this for the legendary Samsung Galaxy Note, which has already become almost a household name? This model is a symbol of its design and should remain that way for the fans of the brand. Even a limited edition folding series based on the Note is not acceptable in my opinion. It is necessary to move technologies forward, but it is also not worth flirting. In this case, you can not only fail to find new fans of the brand, but also lose the old ones, and this will be completely sad. And what do you call such a limited edition? Samsung Galaxy Note Fold? In my opinion, absurd, right?