OnePlus 8 officially presented. Which of the specs did we guess?

We've been talking for months about what the OnePlus 8 was supposed to be and what versions it would have. The love for OnePlus in our country is not as great as in the United States, but this topic is still of interest. At least due to the fact that these smartphones still stand apart and are not like any others. I have very specific complaints against them. I have already talked about this and will tell you more than once. For now, let's just talk about the fact that the new OnePlus 8 has finally been officially shown to us. It makes a very good first impression. Moreover, some of the rumors have not been confirmed and this is a little strange. But the company may still work in this direction. Now we are interested in something else. What is he? Wait. Here they are!

The design of the novelty can hardly be called unique. Some of the elements were borrowed from the OnePlus 7. For me, that's good, because something, and I really liked the design and ergonomics of last year's device.

It is frustrating that the new flagship is worth … Like a flagship. Now it is a full-fledged device, which can no longer say that it is inexpensive, but good. Good – yes, but inexpensive is no longer about OnePlus.

The appearance of the new OnePlus

If you remember, last year OnePlus 7T and OnePlus 7T Pro were very different from each other. The OnePlus 8 and OnePlus 8 Pro look very similar, although the Pro is clearly larger and has better specs.

The waterdrop notch that was on the OnePlus 7T last year and I loved it is gone. Now, instead of it, the hole is left aligned. The notch is quite small at just 3.8mm, which is only slightly larger than the notches in the display on the Samsung Galaxy S20 series (3.6mm). The hole in the screen is bad.

The back of the OnePlus 8 houses a triple-lens camera, not in the circular module we saw on the OnePlus 7T, but in an elongated one. We can say that OnePlus changed its mind after a failed experiment.

As for the OnePlus 8 Pro, its design is almost the same as the OnePlus 8, but the display is slightly larger (6.78 inches versus 6.55 inches). Since the company has ditched pop-up selfie cameras, the device has gotten a bit lighter at 199 grams compared to 206 grams in last year's pro version. Another difference between the Pro version and the simple “eight” is the additional camera module. 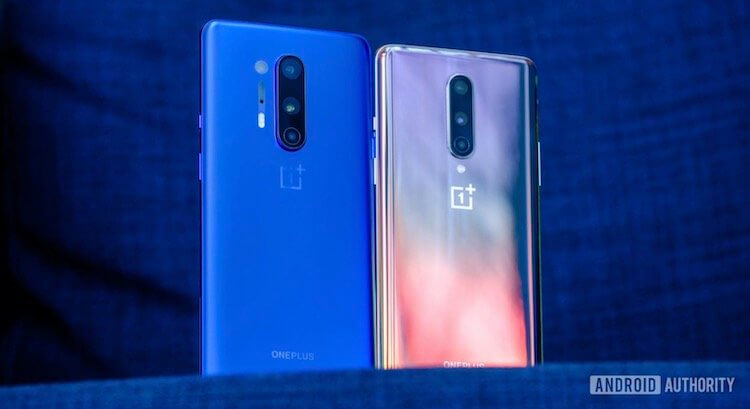 The OnePlus 8 comes in several new colors (Onyx Black, Glacial Green, and Interstellar Radiance), as does the OnePlus 8 Pro (Onyx Black, Glacial Green, and Ultramarine Blue). At least this is the literal translation of the name of the flowers. However, not all configurations are available in each of these colors. If you want to buy this smartphone, you have to make a compromise.

Both the OnePlus 8 and OnePlus 8 Pro received the top-end Qualcomm Snapdragon 865 chipset paired with the X55 modem 5G. This provides both smartphones with support for fifth generation networks. However, one must be careful, since when buying models that are wired for operators, some types of connection may not be supported.

The OnePlus 8 Pro, unlike the regular OnePlus 8, also received two very noticeable updates that OnePlus fans have been asking for for years: wireless charging and the official IP68 certification (water and dust resistant).

Wireless charging has a power of 30W, which corresponds to the power of wired charging. However, to get the fastest charging speeds, you'll need to buy the official Warp Charge 30W wireless charger for $ 69.95. Regular QI charging will be supported, but the speed will be significantly lower.

In order not to list all the specs now, just look at them in the table below. OnePlus phones are getting more expensive every year. This is logical, because they are always equipped with a top processor. This alone makes the price rise. And the fact that the company has gained weight and can already afford to set high prices. Even at this price, its smartphones will still be bought.

In the US, the OnePlus 8 and OnePlus 8 Pro will be on sale starting April 29, with pre-orders being accepted today. It is too early to speak about the terms of availability in Russia. Have you already wanted one?

In addition to the smartphones themselves, the company showed the Warp Charge 30W wireless charger, which is the OnePlus 8 Pro wireless charging dock. This charging station will also be available starting April 29 for $ 69.95.

I would love to use such a charge. Moreover, in principle, I love them and have already talked about it. The only pity is that it will reveal its full potential only with the OnePlus 8 Pro, which I do not want to buy for that kind of money.